During a long weekend last year, a group of friends and I headed to a small  sea-side town around 100 miles from Bombay. Enroute, we stopped at a small hotel for refreshments – a franchisee of a reasonably well known restaurant chain in India. However considering it was along a highway, although a busy one, we weren’t sure of the quality of their service or their menu items.

Such a situation calls for a safe bet on steamed ‘Idlis’, a very popular South Indian dish. Simple, clean, no toxic masala, demands minimal cooking skill, etc. [TIP: If you ever travel to India and want to play safe, Idlis are the way to go]

As we waited for the Idlis to show up, I noticed something that lit up my eyes – a black board scribbled with numbers in an adjoining room (not meant for customers). I discovered that the board apparently served as the performance dashboard for managers at the hotel.

I took a closer 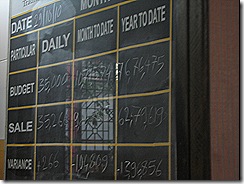 look (and also managed to click this picture) and noticed target vs. actuals, YTD and MTD numbers. Suddenly the nondescript hotel piqued my interest. It did seem like some professional thought was being applied in managing the setup. At least I certainly couldn’t have imagined the small hotel would approach its performance with such number focus.

What puzzled me really though was how they could use that information on the board to influence any revenue when in fact, they had very little control over it.

Consider this: On any given day, their revenue is directly influenced by the volume of traffic on the highway outside and by the number of people feeling hungry as they cross that section of the highway. As you will agree, they had no control over either.

The only influence they could have is in making sure their hotel was visible on the highway from at least a mile or two away (a strategically placed billboard, perhaps) giving enough time for travellers to note, relate to the brand and (perhaps discuss with fellow travellers to take a consensus) slow down, park and walk in.

But once the billboard goes up, how much influence do they really have on what happens next – other than by praying? 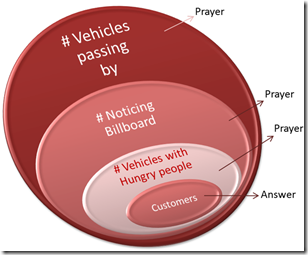 ‘None’. Zero. There is absolutely nothing they can do to make more customers walk in. (see image on left)

In the final analysis, the black board was saying something that summed up the performance of the hotel – a snapshot the franchiser would be interested in, but for the franchisee, it does not provide any insight on what was being done right (or wrong) that could suggest focused action to improve business further.

Obviously, the real control they have is only in what they can do once a customer does walk in. If their service and menu items are able to delight the customer, they could create loyalists who would stop every time they pass by.

And so, if ‘customer delight on service and quality’ were made to be the defined objective, then the measures tracked today need to be revised – or at least, seen in context of some additional measures that can influence business more directly. You might measure things like average bill amount for the day, number of repeat customers, etc. You might want to find a mechanism to track if first time customers (those that answered the prayer) will come back again, ratio of repeat to new customers and so on.

Those are the kind of metrics that will eventually help the hotel drive more revenue.

In a sense, I think firms of all sizes, in almost every industry, are grappling with a similar challenge – that of not tracking the real measures of business and operational performance. That of chasing the wrong measures. And then, having to depend more on prayer than other things.

BPM has opened up a whole new approach and opportunity to measuring performance and I see more and more organizations looking for those as stated benefits to leverage. Yet, it seems to me that many organizations are falling short of identifying relevant measures that can actually serve as a means to take corrective action and push a dipping graph back up.

Have a great weekend!