To me it seems that with the onset of ‘Social Media’, the bigger theme of  a ‘Social Paradigm’, and the associated chatter these have generated, has driven all of us into some kind of a ‘me-too’ mode. Almost everyone in the industry –  you and me included – has a point of view. Almost every enterprise software worth its salt has released, is releasing, talking or thinking about ‘social’ features.

The BPMS market has not been spared either  has not spared itself and is another victim of this great me-too fiasco. And so came this rather early version of Social BPM that we have today. The truth is, we all are actually responding to the ‘Social Paradigm’ with the added flavour of our own interpretations of what ‘Social BPM’ actually is.

And then again, while interpretations may be harmless, what is more relevant is who is interpreting. For my part, I can raise my hands and say ‘my interpretations are perfectly harmless and inconsequential’ and we’ll all agree on both counts. Unfortunately, there are others with a much bigger influence. Most, IMHO, serious distractions.

There are Vendors*. There are Analysts**. There are Systems Integrators***. Tech-writers. An endless number of ‘Social Media Experts’ & thought leaders. And a whole lot of smart people who all have a variety of ideas on Social Networking and Enterprise Social, its different avatars, its various facets. Add to that their own misgivings (or just givings, if you like: I don’t want to sound too cynical here) about the idea of BPM itself and the things that pop up in their heads when they think ‘BPM’.

But if we step back and take a look again at the idea of Social, and then look at what it could really mean, you will see that Social BPM ought to be more about Social than about BPM. And no one can really say for certain that the idea of Social in the enterprise has yet gone through its full course of blooming and maturing as a concept – although, it is true that It is being better understood as days go by, its impact is being appreciated better, the technologies around it are correspondingly adapting and evolving, the change implications are better appreciated now than ever before, the communication and collaborating potential is being perceived more holistically. In fact, in retrospect, those early concerns around employee productivity that we had when we called it ‘E2.0’ sound almost naive and silly. Because we are today talking about pulling off the exact opposite effect of heightened productivity.

But the truth is, we are all still coming to terms with this new way of looking at collaboration, communication and networking within the enterprise. With Facebook and all other things ‘Social’ that we do in leisure outside the proverbial 9 to 5 is great and fun. Adventurous and addictive too. But put that in the 9 to 5 context and we really are looking at radical stuff. Seriously radical stuff. The kind of stuff that shakes the very fundamentals of flow of work, flow of knowledge, flow of communication, organizational structure and, God forbid, control and command.

Really. Take a deep breath and smell it. The implications are enormous. 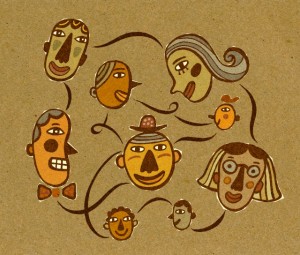 And that really means rejigging many of the fundamentals we have built our conventional ideas of BPM around.

As I was writing this piece, two seemingly unconnected posts were made by two of my favourite people.

The first is from my top favourite commentary on Enterprise Social topics, by Sameer Patel (a big source of inspiration to me on quite a few things beyond blogs and the old 9 to 5 stuff) who posted a piece titled Enterprise Social Road to Nowhere. What he writes strikes a chord in this discussion –

We say its about the people but that’s just not enough in the business world. Facebook is about people and content, and in the consumer context, that works. You’re motivated to stay connected to friends and share. And as Instagram proved, there are 1.2 billion reasons why Facebook wanted to own one of the most important contextual social object for sharing on the social web. Hell, Pinterest is all about pinning pictures. In the enterprise, that motivation to connect takes a lot more…

That is so true. Sameer’s post is a commentary on Dave Winer’s article titled Protocols don’t mean much where Dave talks about the importance of compelling content over technology. In our own BPM world, it translates into the right task context. To quote Sameer again,

Content, as Dave suggests for protocols, has a place in enterprise social networking. But only when the task context in which it’s presented is evident does it naturally create a reason to huddle. That context comes from data or an exception/ enrichment in process, or a project / task that needs to get done.  Otherwise, people to people connections becomes more like a directory where engagement is optional. And we already have LinkedIn for that.

Absolutely. And force-fitting ‘social’ wont really achieve much. And we already  may be guilty of that today.

The second post is by that good old Cage Rattler. Theo has this to say in his post he calls The Art Of Serendipity In BPM, Case Management And Enterprise Social:

While everyone is mostly concerned with designing process and outcomes around the ‘happy path’, no happy path is truly without deviations and exceptions and serendipity is concerned with finding happy coincidence or positive effects from unrelated cases. If we look at Case Management, and specifically the Adaptive/ Dynamic variant, definitions centre around it being “information technology that exposes structured and unstructured business information (business data and content) and allows structured (business) and unstructured (social) organizations to execute work (routine and emergent processes) in a secure but transparent manner.

The tangled wiring in my head is trying to make a correlation now between what we know as ACM and serendipity in the Enterprise.

And this is one of the reasons why I like the concept of adaptive processes Keith Swenson talks about. I would say that it is more centred around the idea of how work really flows – or ought to flow – in an enterprise that is well adapted, adept and more attuned to the fundamentals behind that ‘Social Paradigm’.

And so where this Yellow Brick Road leads is not to Oz but the rather bizarre notion that Case Management and Enterprise Social are in fact serendipitously linked to each other. In my hazy mind the two can no longer survive without the other as the world moves forward because while one focuses on the knowledge worker and unstructured work, enterprise social can support the emergent feedback and insight gleaned from those workers and expose it to create adaptive processes.

Bottomline? If you want to infuse that ‘Social Paradigm’ into BPM even before we get the real true picture of what a fully mature Social Enterprise would look like, you better think again.

And take it slow. The enterprise and its ways and structure is set to go through a helluva lot of rejigging. Oh boy. It is.

And oh yes. Speaking of such rejigging, there is this other idea of Gamification  we haven’t even brought up yet in this discussion……..