One of the pet peeves for the fanatical BPM believers among us has been the gap between what outcomes of BPM initiatives  could be if done right, versus what it seems to be on the ground.  We (the fanatics, that is) have been looking at that gap and discussing and debating why BPM benefits seem so elusive, why customers find it so challenging to do all the right things in order to ensure great benefits and so on.

But to be fair, those peeves and more importantly, the alleged ‘gaps’ have been more academic than practical – because all along, there was one crucial link missing: lack of sufficient number of success stories (or even stories of failure, for that matter) of firms adopting BPM. There simply weren’t enough BPM adopters publishing their case studies and BPM stories.  Yes, we have had many, but it hasn’t exactly been a steady shower of BPM success stories – more like a sporadic drizzle.

Last week, I was at PegaWORLD 2013 and it was like walking through a magic door into a world of BPM success stories. It was hard to miss – the most obvious common theme, was project/program outcomes and benefits and compelling customer testimonials – every single one of those talking about the kind of benefits we have always wanted to see. Stories that seemed to work as a magical antacid to all of us who have felt the old heartburn over a general inadequacy in leveraging BPM (the concept) and BPMS (the technology) right.

Day One started with a very slick AV intro prior to Alan Trefler’s opening Keynote. It was totally Hollywood Sci-Fi style, space animation, music, sound effects – the works.  As the opening music built to a crescendo leading to a sound of an explosion  – probably what inspired Jim Sinur to come up with the phrase ‘Sonic Boom’ , the very first word of the event to come booming out of the speakers was the word “agility”. And then the huge screens and audio  hurled out a barrage of carefully constructed messages – the all too familiar ‘idealistic asks’ from BPM –

“ Agility. I need business Agility. I need to move fast”
“I need to keep customers”
“Need to boost productivity”
“Customer Experience – we put a premium on it”
“How do we fill our execution gaps?”
“Can’t wait 12 months for a solution”
“If we don’t grow our revenues, we are not going to be viable”
“Regulations are always changing – need to adapt all the time”

.
With the ‘asks’ put out upfront, the outcomes followed –

“We went from 14 days on the things that we rolled out to 14 minutes”, Mhayse Samalya, President Farmers Commercial Insurance

Has BPM indeed arrived? Well, it certainly was tempting to think so.

Customers from OCBC, ING, Telerx and Heathrow Airport, each mentioned benefits relating to ‘Customer Satisfaction’, ‘Time to Market’, ‘Throughput’ and ‘real-time visibility, ownership & accountability’, respectively. Each one of those, undoubtedly, music to BPM Believers.

It is obvious that Pega is trying to appear less of a software product company and seems set to taking its position as the enabler of large scale enterprise business transformation. And I must say, they are doing a pretty good job of it – at least with all the messaging that came through during the event.

Alan Trefler’s keynote itself rubbed this in further – he suggested that technology essentially let businesses down by not providing the right business benefits and he in fact, went to the extent of calling IT an ‘insult to business’. Alan also made a few announcements – one of which was the launch of a book he’d written about a coming ‘Apocalypse’ (a customer apocalypse, as he called it) titled “CUSTOMERPOCALYPSE”, which was all about the urgency and the critical need for businesses to be adaptive and become able enough to respond to market forces and demands with speed. The idea is that those businesses that aren’t capable of that will to be faced with overwhelming challenges to even survive. Now, it may be just me, but I see this  as a ‘get-on-the-Pega-bus-and-don’t-miss it–for,-if-you-miss-it-you-could-go-bust” kind of a fear instilling message, but to be honest, I tend to agree with Alan. I think the time has indeed come for businesses to sit up and really re-evaluate themselves and their ways of executing their businesses, their IT strategy, operations and their drivers. Of course, unlike Alan, I may not necessarily recommend Pega as the only course to take, but that need and urgency is certainly real and something to think about – NOW. This is something I plan to revisit in a separate post – so lookout for that.

The other announcement that struck me as most noteworthy was the release of Pega Version 7. A couple of Keynotes after Trefler’s, Kerim Akgonul, VP Product Management at Pega introduced “Stage-based Case Management” – a concept weaved into the new release. Some of us wondered if we could actually SEE it, and when exactly the release would be available. But later during the event, at the Tech Pavilion, Theo Priestley and I got a glimpse of a sort of a demo of ver7 – Theo has put up a post on Stage-Based Case Management with some screens of 7 here if you are interested.

There were some really interesting keynotes on Day One – Alan’s talk was followed by Annette Barnes from Lloyds Banking Group (and I must write about this one – expect it soon). A very genuine and engaging talk by Eric Martinez had a message much beyond BPM and Pega (especially for the Tax Paying Americans). @PegaKerim aka Kerim Akgonul, spoke about a Quantum Leap in BPM and Case Management. I skipped Paul Daugherty’s talk entitled “Every Business is a Digital Business” for a different meeting, but managed to catch the first 10 minutes and then later online. All the keynotes – including those covered on Day 2, are available on the Pega site – at this link, if you are interested.

Overall, it was a great event for me. What’s more, there were a notable few from the BPM community also attending the event –  the very engaging and super sharp Neil Ward-Dutton of MWD Advisors, Derek Miers and Clay Richardson (Forrester), Jim Sinur (he is just too cool, really), Peter Fingar, Doug Turner, Patrick Lujan (glad he came to PW!),  Joanne, and of course Theo – all of them, among my favorite peeps in the BPM world) and generally, I had a blast – I also had to manage a booth at the Technology Pavilion which meant I couldn’t attend all the breakout sessions I had wanted, but I did manage to slip into a few.  One of those was an excellent session by the astute Derek Miers, Forrester. I plan to write an exclusive post on this one in the coming week.

This was my first ever BPM Vendor event and yet I can tell that in terms of positioning, Pega has figured out the game right. Going back to my earlier reference to the ‘gap’ in what BPM can do and what gets done, I’d say most other BPM product vendors haven’t shown as much commitment to the outcomes as much as Pega has (Appian and IBM BPM, are you listening?) The BPMS stage is going to (or needs to)  mature into a more outcomes driven game. We aren’t anymore in the enterprise software licenses game where you typically sell licenses and forget. Vendors of BPM products need to really tie-in their capabilities to outcomes rather than a pre-sale talk about good to have features.

And that means,  BPM vendors in the market need to understand that their credibility does not merely lie in product capabilities and feature sets any more – they need to tie-in to outcomes. And that calls for a big shift and I think every product vendor needs to rethink their post-sale strategy. 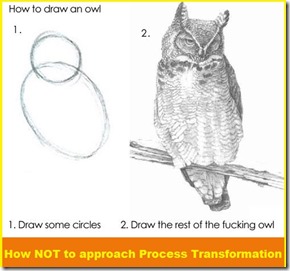